Getting screen output using Assembly was plenty hard enough.  Getting a printing subroutine was even tougher.  I don’t want to litter my programs with the same code over and over every time I want to print.  So I looked for a way to set the printing commands into a useful re-usable routine.  If your program prints more than one time to the screen, it becomes beneficial to have a printing subroutine.  It saves memory, both source and assembled.  And, with these old 48K to 128K (8 bit) machines, every byte counts.

In BASIC and many other languages printing is very simple and there generally isn’t a need to make it into a subroutine unless you are doing something else along with the printing.

To accomplish this milestone I had to read, a lot!  I had to learn about using JSR and RTS, the assembly equivalents of GOSUB and RETURN, and how the 6502 manages the stack.  Ultimately the most valuable resource were the Boot Camp articles by Tom Hudson published in A.N.A.L.O.G magazine, specially the late 1985 and early 1986 issues.

The JSR and RTS instructions are defined below:

This is the small program I wrote that uses a subroutine to accomplish the printing.  Following the code, I detail what it does.  Again, I am using the OSS Mac/65 assembler.

Lines 70 to 76: Definitions for the CIO and IOCB addresses used by the print routine.

Lines 80 to 82: Definitions used in the strings to be printed.

Line 5005: Label the starting address of the print subroutine.

Line 5030: Transfer the Y register (which holds the strings address low byte) to the Accumulator.

Line 5060: Store the Accumulator value into the IOCB command address.

Line 5105: Call the CIO routine.  It will use the IOCB information that was just setup, causing the string the be printed until either 255 characters are reached or EOL ($9B) (155) is encountered.

Line 5110: Return from the print subroutine.

After the code has been entered and ready to assemble: 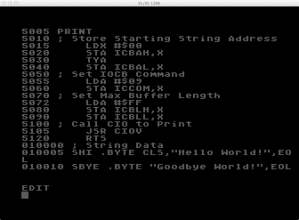 I assembled the code using “ASM ,,#D2:PRINTSUB.COM” to generate the compiled version.  Look ma, no errors! 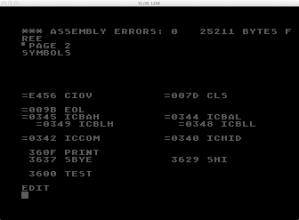 Now, I’ve exited to DOS (SpartaDOS) and about to run the assembled program: 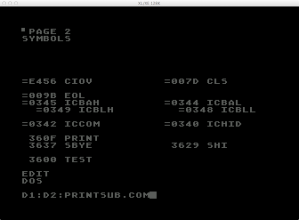 And the results.  Notice the screen was cleared as well due to the inclusion of the CLS ($7D) (125) character in the first string: 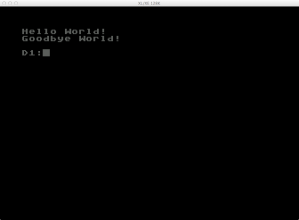 Accomplishing the Same Thing in BASIC

With BASIC, the same outcome can be accomplished with this.  It’s a lot simpler, but not nearly as efficient in machine cycles.

Now to incorporate the subroutine into my preferences program!

I’ve been eager to get something displayed on the screen using 6502 assembly language.  The task has been quite difficult, but I finally got it.  I ended reading  large sections of the following books before getting a handle on the task:

And, although I read this one many times almost 30 years ago, I re-read the entire thing with special focus on the IOCB vectors:

I found the most benefit from “Assembly Language Programming for the Atari Computers”, and “Mapping The Atari”.  I managed to get a single character on the screen using OS vectors documented in the latter.  Full strings of text were elusive until I started reading sections of the former.  I highly recommend both of these for the beginning Atari Assembly language programmer.

Printing to the screen in Assembly is not as easy as it is with BASIC.  In BASIC, printing “Hello World!” is accomplished in one line of code:

The BASIC PRINT command handles most of the work for you such as: opening the screen, copying the string buffer to the screen, and closing the screen.  In listed form this program takes up 24 bytes of disk space.  Since BASIC is interpreted and not compiled I do not have a “compiled” size, however it’s 56 bytes in tokenized form (on disk). 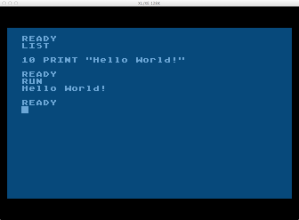 In Assembly you have to do it all.  To accomplish the task I learned about the CIO (central input/output) routines and using the IOCB (input/output control block) for the screen device.  The same Hello World program in Assembly increases from one line to fifteen lines.  The listed size is 878 bytes on disk and only 50 bytes in assembled form (on disk).

So what is all that doing?  I’ll break it down by line: 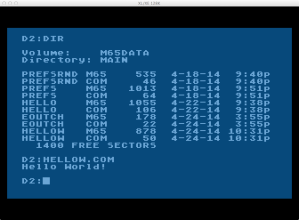 What did I learn?

It might be easiest to state by starting with an analogy.  Say you want start a car.  In BASIC you might do it with an easy to understand command, like:

but in Assembly you have to explicitly give all the process steps for starting the car, like:

The difference being the instructions are executed much more efficiently, and you have much more control over the starting process.  What if you needed to apply a choke, it might not be so easy in BASIC, but in Assembly you just add that step.  Assembly isn’t as hard as it looks once you understand the need to break down each task into very specific steps.

And with that I have officially surpassed the Assembly knowledge I had long ago and completed a task I was never before able to do!  Now its time to put screen display to work.  I’m going to add some messages to my PREFS program.