SpartaDOS is great MS-DOS like DOS (Disk Operating System) for the Atari 8 bit line of computers.  It was released on disk and eventually on cartridge too.  It received updates to allow hard drive access and boasted one of the best memory footprints, which is critical for these old 48K to 128K machines.  It also supports sub directories and timestamps.  It is my favorite Atari based DOS.  It’s still actively maintained today!

In this post I’m documenting how to create 720K ATR disk images for use in an Atari emulator.  Why not just used the hard drive emulation for a giant 16MB disk image?  I like to work with disk sets, keeping things organized that way.   The Atari is single tasking system, so I don’t need access to multiple categories of items.  And if it gets corrupted I won’t lose everything.  90K images are generally enough to hold DOS and a few programs.  The 720K image yields enough room to hold DOS, some utilities, and a handful of programs.  For purposes here, I’m focusing on SpartaDOS 3.2g.

There are a few emulators out there, but the one I like for the Mac is Atari800MacX.  I also helped with testing new releases years ago.  As such, the first steps are focused on that emulator, but you should be able to use the parameters listed in other emulators and achieve the same result. 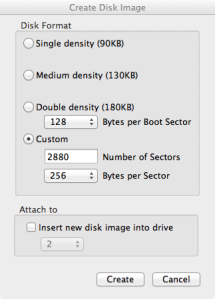